2. Copy and paste your private key, and then enter the passphrase used for encryption.

3. Click "Set". Now your private key is stored locally and encrypted with the key generated from your passphrase.

To import the public keys from the publishers, first login with your passphrase.

Copy and paste the public key you want to import, and enter your publisher's group number.

Hit "Import" and you are all set. Now you can use the extension as shown in the previous blogs.

Here is a brief summary of the progress last week.

I removed the google closure library from the extension last week and imported a new crypto library called forge, since forge is more compatible with openssl (we are using openssl for the publisher) and more developer-friendly in terms of API. Also, I added the function of signature verification to the client extension.

Group key decryption was added to the extension this week. The group key is encrypted with some symmetric ciphers, for example, aes-256-cbc, and the key of the symmetric cipher is then encrypted under a user's public key using RSA. Therefore, only the user knowing the corresponding private key can retrieve the key for the symmetric cipher, and then decrypt the group key, which, in our case, is indeed the information of the current group state, and can be used to derived the actual group key.

At present, the encrypted group key obtained from a key server is in the following format:

For the RSA decryption compatible with openssl, I have imported another library called jsencrypt. To be honest, I'm feeling uncomfortable with importing so many different libraries in javascript, so I have started implementing my own crypto library in javascript. For now, the library only provide some basic interface for big number arithmetic including addition, subtraction, multiplication, and division. I am going to work on the library further so that encryption and decryption with various ciphers will be possible. The library is currently held on github. Here is the link: https://github.com/qiyuh/CLJS.

During the following weeks, I will have the extension check the signature of the message to ensure the authenticity. It seems that I have to find some other libraries to do so because openssl signs a message with a pretty complicated process. The message is first hashed, and then ASN1 encoded. So what's signed in the end is the ASN1 encoded hash of the message.

I am struggling with different formats for encoding the keys this week. Basically, Nick is using the PEM keys on the publisher side, while Google's e2e library can only import the PGP encoded keys. Although the body of both formats is in Base64, they have different key structure, and I cannot find a converter between the two formats at this moment.

Here is an example of a PEM encoded private key. 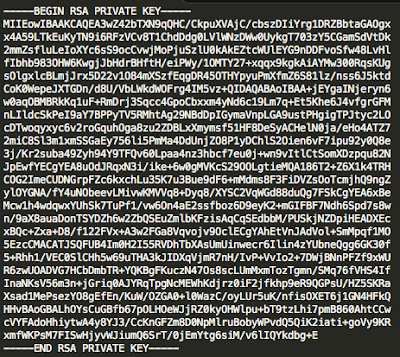 The PEM encoded keys adopt the ASN.1 (Abstract Syntax Notation One) notation, and the structure of the key is as follows:

It is simply an array of different parameters of the RSA algorithm. The key material is encoded in packets, which in turn consist of packet header, indicating the type and length of the data, and packet body, the actual data, encrypted or unencrypted. For more information, please refer to Section 5.5 in RFC 4880.

If we decide to transform a key in PEM format into one in PGP format, so that we can make use of the e2e library to import a user key, we may need to parse the PEM key and then generate the PGP formatted key according to the parameters obtained from the PEM key. I found a ASN1 decoder in javascript and modified it a little bit to print out the parameters in the PEM key shown above. 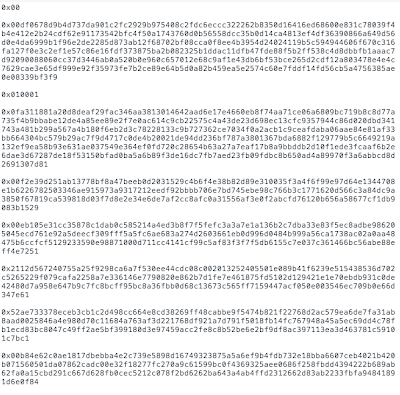 I will discuss with other teammates about the issue of the key format. If we decide to adopt the PEM encoded keys on the publisher side, probably I need to write a converter between the two key formats, PEM and PGP.

Sorry for the late update. First is some clarification on some of the statements I made in my previous blog last week. I misunderstood the usage of the passphrase in the openpgp keyring of the google's e2e library. It served just as a key for the encryption or decryption of the keyring, rather than an identifier of different keyrings. Therefore, for the support of multiple users, only the passphrase sounds not enough, and the google's library stores only one keyring encrypted with the passphrase, given that it is not empty. When an user enters an incorrect passphrase, the library gives the following warning:

As a matter of fact, the localStorage is not modified. Instead, because the HMAC key is also generated from the passphrase, as long as an incorrect passphrase is given, the computed HMAC is not the same as the one stored in localStorage.

In one word, the e2e library stores only one keyring encrypted under the passphrase, and if an incorrect passphrase is entered to access an encrypted keyring, the attempt fails since the HMACs do not match.

A basic file parser was added to the extension. For now, the extension is able to handle AES decryption automatically. For an encrypted file like this,

Finally, there seems to be a bug in injecting codes to subframes. Google does not provide API for injecting code for a specific subframe, so I import a library implemented by a third-party developer to allow me to do so. However, this library, although works, is not stable and fails to inject codes to a subframe sometimes. I just came up with a new idea to inject codes using random number as an identifier for different subframes. I am going to implement this and talk about it if it works in my next blog.
Posted by Qiyu Hu at 11:24 AM No comments:

I implemented a user interface for entering passphrase which may allow the support of multiple users in the future. Besides, I took a look at the google's e2e library, especially the keyring implementation of the openpgp, and played around with it.

As for the google's e2e library, I took a closer look at the "keyring.js" file under the openpgp library this week so as to learn how they handle the key management.

The keyring and all the associated keys are stored using the HTML5LocalStorage. To be more specific, the whole keyring is first serialized, and then encrypted using the passphrase. What is stored is an encrypted string recording the information about the keyring. The following is the function for encrypting the serialized keyring. 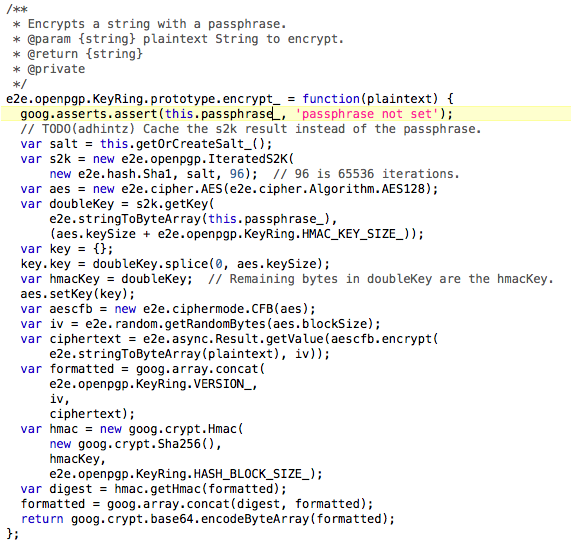 As shown in the figure, the serialized keyring is encrypted using AES128 under CFB mode with a key generated from the passphrase and a random initialization vector. Also, an HMAC (Hash-based message authentication code) is included for further verification of data integrity and authenticity. Therefore, even though the attackers may modify the HTML5LocalStorage, the library can detect this and avoid using the modified keyring.

However, it seems that the library is only able to import keys with the openpgp format in ASCII Armor. If we want to import keys in other format, probably we need to implement our own keyring.

The chrome extension supports <iframe> tags with the 'src' attribute pointing to a gnocchi file on the server now. Also, I change the way the browser interprets a gnocchi file to prevent the possible code injection attack. Rather than "text/html", the modified content-type of a gnocchi file is "text/plain", so all the injected codes would be regarded as just plain text by the chrome browser.

For now, I'm using a global variable to record the urls of the gnocchi files. I know that using global variables is not a good practice in coding, but it seems to me that it is the best solution. Alternatives are message sending and local storage. Message sending is more tedious and turning the code even less readable than global variables. Besides, I have no idea how to embed a listener on the event "chrome.webNavigation.onCompleted" inside another listener on the event of receiving message at this point. Anyway, I will manage message sending to see how well it works if I have time. As for local storage, that is a inferior choice considering the performance of the extension. Also, local storage runs asynchronously, competition between different processes makes the extension less reliable.

Here is the result of the test case with 20 <iframe> tags in a webpage (some of them are not visible due to the limited size): 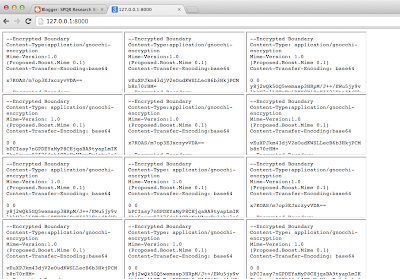 Key management on the client side is my next step. I will take a look at google's e2e library to learn more about how they manage it. Furthermore, message sending between different listeners of the extension is also in my plan so as to get rid of annoying global variables.